We hope everyone had a great Easter!  We sure did.  It's always fun to spend time with friends and have an extra special Sunday to celebrate the resurrection of our Savior!

Another one of Stepheni's very favorite things about Easter is all the cute Easter outfits for the little ones. 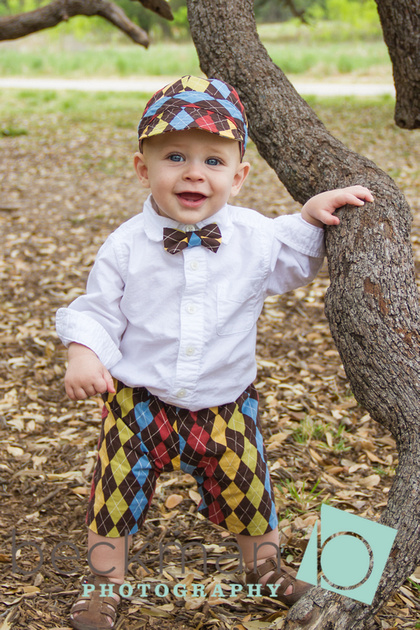 Now, I know this is a photography blog, but I thought I'd mix things up a bit and explain how I made this cute outfit for my little man.

I made the hat, the bow tie, and the shorts.  The shirt is just an oshkosh b'gosh shirt that I got at sears and the adorable sandals were a gift.

For the whole outfit I ended up using approximately 1 yard of the argyle fabric, and about 1/4 yard of a coordinating fabric (for the lining of the hat).  Other supplies included: Freezer paper (for tracing patterns), 1/2 inch elastic (for the waistband of the pants), 1/8 inch elastic (for putting on the bow tie), and thread (I used brown).  The only equipment I used was my sewing machine, a hot glue gun, pinking shears, and my iron.

Let's start at the top.  I made the hat following this pattern and these instructions.  It's actually called a welder's cap and it worked perfectly for my little man's head.  I am no expert seamstress (as you can probably tell if you look too closely at my crooked topstitching), so it wasn't the easiest thing to make, but after one failed attempt, I think this second one turned out swell.

Here are some tips that I have (especially since I made the hat twice): 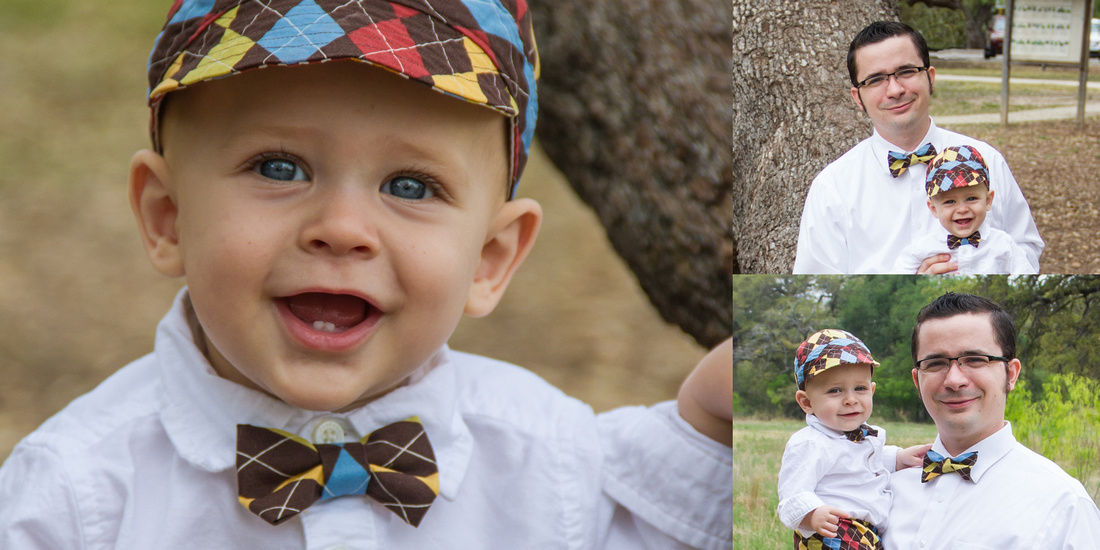 The bow tie was definitely the simplest part of this outfit.  I also made one for my husband.  Aren't they the cutest boys? (I may be biased, but that's okay).  Anyways, I made the bow tie following this tutorial.  The tie that I made from the tutorial is actually the one that Stephen (my husband) is wearing, so it was a little bit too big for my little man.  To make the baby one I just adapted the size, but followed the exact same steps.

I did do one thing different.  I tried using that clip on earrings to make a little clip on tie, like in the tutorial, but they clip wasn't strong enough to hold on the tie and it just fell off.  So instead of making a clip on tie, I used some 1/8" elastic that I attached to the back of the tie using hot glue.  I looped that around the neck of the shirt under the collar and then attached the other end behind the bow tie using hot glue again.  This way I could just stretch the elastic around my boys head and then put it under his collar and the bow tie stayed on like a necklace.  I did the same with both of the ties that I made.

I followed this tutorial to make the shorts.  It was super simple.  Obviously, I left off the cuff, and I shortened the length.  I traced my pattern on freezer paper and ironed it on to make cutting the fabric super simple.  I also used 1/2" elastic instead of 1" elastic.  That's it.  The only tip I have is to make sure to leave room for the elastic waistband.  I forgot to make the waist wide enough to allow for some stretch the first time, so I had redo these pants.  I also trimmed all my seams with pinking shears, and that seemed to help with any fraying.

After I was finished I washed the pants and the hat.  They washed beautifully!  The hat came out a little misshapen, but after a quick run under the iron it was good as new.  I love things that are washable, especially with babies.

That's it!  I hope this will be useful for someone.  If nothing else, I know I enjoyed sharing more pictures of my adorable little man.  Please leave a comment if you have any questions or comments.